With the Leadfoot from Turquoise Cascades to Dracula’s Cottage - Road Trip Croatia I.

My foot feels like lead on the accelerator pedal. The traffic sign is indicating the speed limit is 60, I think. It's difficult to read when you are driving 90, while fifty Croats are honking and passing you while they are driving 120. Friends of the night, a road trip through southern Europe is not a walk in the park. It is the Battle of Gettysburg on four wheels. If you don’t have at least one dent, you lose.

My boyfriend, who has been driving cars a few decades longer than I have and who has hundreds of thousands of miles of experience under his belt in the United States, seems to recognize that as well. When he sees the traffic apocalypse occurring in Zagreb, he gives me the keys and says: “You drive. You are European and you know how this game works."

After a crazy flight and a reunion following months of separation due to Corona, we spent four days in Croatia's capital and are now traveling south to Podum via Pula. Podum is a small town where the plaster trickles out of the bullet holes from the Yugoslav wars in the nineties. There we move into a cottage with a fabric-covered toilet seat. The house becomes our base camp for our excursions to the Plitvice Lakes National Park and the Northern Velebit National Park. Over the next few days, we discover paradise between turquois-green cascades, save ourselves in a bus a mere second before a booming thunderstorm hits, crush a chair with wine and pizza, and rumble over a narrow, foggy gravel road with a rental car. These are days when I again realize that my boyfriend and I are equally crazy, and that all of life is an adventure.

Driving in Croatia: Speeding through the construction site

A construction site. The road narrows, orange cones flash by like clown hats at a circus, and the speed limit drastically lowers. So far the situation seems just like on the Autobahn back in Germany. Then the entirety of the Starfleet Command suddenly roars past us in the form of cars driven by Croatians and covers our legal-speed rental car in dust and ashes. My boyfriend is looking out the window at the landscape, looking like Joe Cool, as he rather causally remarks, “I don’t think we are going fast enough.”

“I’m already driving 30 over the limit! What else should I do?” I shout. Then I throw both of my hands into the air and off the steering wheel. Just like a Croatian would do.

At least we are out of downtown Zagreb, where the other drivers seemed to have honked at me at least 17 times every half-mile because I was silly enough to actually stop at a red light or make a turn on three wheels rather than just two. Luckily, I already have some experience with this nonsense driving style from previous road trips through Italy, Spain, and the south of France. I find that the only chance of survival in these places is to ignore all traffic signs and laws and to fully adopt to the local driving styles. And to yodel an “Our Father” out the window. Frequently.

Somehow, I am able to steer the rental vehicle accident-free to Podum, where I park in front of our little house like a jackass, although there are 10 acres of clear land around us. My boyfriend then reparks the car appropriately. You can’t be good in everything.

The House of Horrors: Life in Croatia's Backcountry

Podum is one of those villages that you do not see if you accidentally blink as you pass through. Literally. It has only 108 inhabitants and a few weathered houses. One of those houses is the small, old house that we found through Airbnb. Anyone can stay in a lame hotel. We prefer a more authentic cultural experience. As we bump along the road to the house we see buildings without roofs and with fist-sized holes in the facades. When you see the hordes of tourists that trudge through Croatia today, it is difficult to imagine that there was still a war here in the 1990s. Between 1991 and 1995 the Croatian army and the Republic of Serbian Kraijna, a state that was never officially recognized, fought in this area. The bullet holes can still be seen on many walls in rural areas, presenting a dramatic image. As if they were a silent still life arising in the midst of the conflict.

Near midnight I awaken and hear strange noises. "What is that?" I ask until my boyfriend is finally awake.

"What do you hear?" He mumbles as he snuggles closer to the back of my neck.

“I don't know, sounds like a key,” I describe in what I thought was a picturesque way. Not that I really think they were keys, but that description seems pretty close to the sound. Then I feel tired, and I fall asleep. My boyfriend, on the other hand, gets up, checks the entire house, and is awake half the night because he now thinks someone is secretly trying to get into the house. Great!

In general, the house is a little weird. There is pink fabric attached to the toilet lid, the tiles have an olive-green 70s charm, the television looks like a gray cube and one morning there is a mysterious oil stain on the kitchen floor.

"I probably shouldn’t have read Dracula before the trip," says my boyfriend.

The next day we drive to the Plitvice Lakes National Park. Because the park is overrun by tourists, especially in summer, we are already up at half past 6 and by 7 o'clock we are at the entrance. We find 16 large, turquoise lakes and several smaller ponds extending over several miles and existing on many vertical levels, which connect to each other as they flow from one to another through a series of cascading waterfalls. It is a unique natural spectacle such as I have never seen before anywhere else.

We begin to climb from one of the lower lakes, tucked between rugged rocks and light green trees. Everywhere the turquoise pools shimmer, they are so clear that you can still see fish swimming many feet down in the water. Sometimes our hiking trail takes us over dirt paths in forests along the banks where we walk over exposed roots, sometimes we are on a wooden boardwalk in the middle of one of the lakes. "This is paradise!" I shout and jump around like a hopping frog on the jetties. My boyfriend catches me again and takes me in his arms. Right in front of us, a massive rock formation seems to pile up, from which moss hangs down like beards on giants. Countless waterfalls seem to just sprout over the edge of the higher lake down to the next basin. The day is warm and the mist of falling water makes me feel like I'm in a rainforest.

In the afternoon we ride on a ferry to the lower part of the national park. Under darkening skies, the light blue waters of the lakes now stand out sharply against an impending apocalypse. We finally make it to the incredibly gigantic Great Waterfall at the end of the wooden walkways. Now we go back to the bus stop. The thunder is already starting. Wind begins to blow. We jump into the approaching bus just before the sky becomes almost as dark as the night. Then, along with lightning flashes as thick as an arm, about 5000 gallons of water suddenly bursts from the sky all at once. Perfect timing. After that the whole park is covered with water and only wear cloth shoes that will take days to dry, so I just take them off and walk barefoot for the last mile back to the car.

Magical forest in the rain of Northern Velebit

The Northern Velebit National Park is a mountain range with fantastic views. Especially when it rains in torrents and you can't even see your hand in front of your face. Since we are out of the big city traffic chaos, my boyfriend decides that he could drive now, finally. But because it has been 10 years since he last drove with a manual transmission, we start as noisy as the seven-time Formula 1 race winner, Michael Schumacher.

“We're almost doing 60 now. I think you can shift into second gear,” I yell over the engine noise with a grin. He looks over his sunglasses and gives me a joking, evil look.

"You know, it's a heckuva of a long walk back to the house from here," he replies as he shoots along the road, mere inches from the guardrail. The road to the Northern Velebit National Park leads through tiny villages that have only a single traffic lane. Something that doesn't exist in the USA with its wide highways and endless horizons. After we pass the ticket booth to the park, the asphalt road ends and only a gravel path with potholes lurking as well-filled puddles remains. Fog hangs deep in the trees. "I am glad that this is only a rental car," says my boyfriend as we ominously rumble through a puddle the size of the Great Salt Lake. I am glad that we have taken out fully comprehensive insurance.

We arrive at the parking lot, miraculously unscathed. Up in the mountains, an icy fog storm is raging. Nothing can be seen of great views and rock formations. We go hiking anyway. We always do. Even though the wind almost blows our sandwiches out of our hands at the summit, along the way we see wonderfully shaped fairytale forests, enchanted roots, and gnarled branches. It's all a matter of perspective.

When we are back in our ghost house in the evening, we sit on the balcony, eating pizza and sipping wine. We are deeply engaged in a trailblazing, philosophical conversation when a noxious roar hits my ear. Then my chair breaks apart, as my 103-pound body plunges somewhat gently to the ground. My boyfriend shouts, "Sarah, what are you doing again?" as his laughter almost causes him to drop his pizza. I want to answer something cool, but then neither of us can stop laughing for several minutes.

The next day we continue down the coast towards Split. But the memories of these moments in Podum will remain with us forever.

The entire travel diary can be found under Road Trip Croatia. 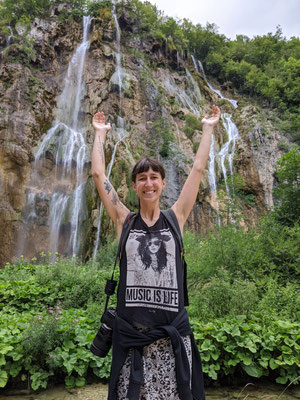 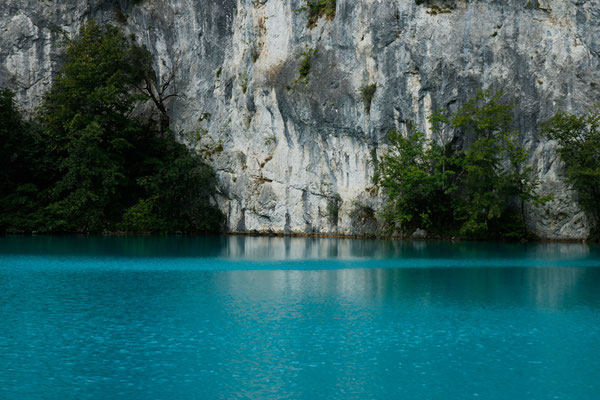 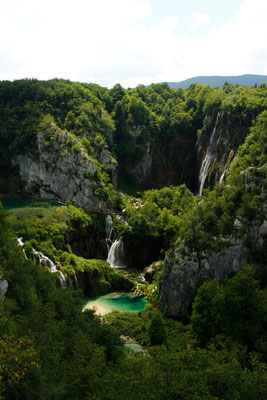 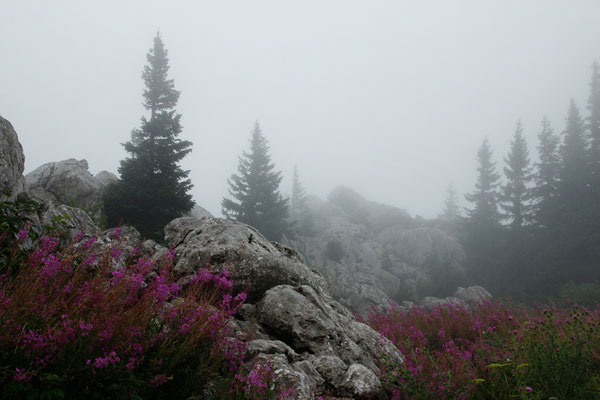