Street Art and a Geyser-Shower: Reykjavik & the Golden Circle—Roadtrip Iceland I.

I am holding my camera high over my head. In the same position for three minutes. My arm is about to break off. At the same time, I am fixating my eyes on the steaming pond right in front of us. Little bubbles are welling up from under the surface while small waves begin to ripple the surface of the water. Steam is rising from the ground all around us and the sky is dotted with tiny gray fluffy clouds. Waiting for Strokkur Geyser. I stop watching the geyser for a second and squint my eyes in the sunlight. Of course, this is the moment where the darn thing erupts. I spin my camera, take a few quick shots, turn around and get soaked in a warm shower of geyser spray. It feels like heavy rain, but only for a few seconds before the eruption is over. Enough seconds to get everything wet. My hat, my jacket, everything.

I have never been that close to a geyser. Not even in Yellowstone National Park. My boyfriend is jumping up and down in joy—soaked as well.

Our Iceland adventure begins with a trip around the island’s Golden Circle, close to the capital city Reykjavik. It is an adventure two years in the making. With an interfering pandemic, border closures and lots of drama. Iceland, finally, one could say. But something always seems to go wrong when we try to meet. And this trip is no exception.

My first airplane is broken, my boyfriend texts me. He is about to take three connecting flights to get from his home in the Rocky Mountains in the US to Düsseldorf, my hometown area in Germany. We are in a long-distance relationship between the USA and Germany that spans 5.000 miles and want to meet in Düsseldorf to fly on from there for a road trip through Iceland.

I am staring at my phone. “Why?” I cry out loud and toss a piece of golden chocolate wrapper onto the carpet in my living room. Why is there always something wrong, broken, or not working when we want to see each other?

Two years ago, borders closed world-wide due to the corona pandemic, only days before we were to meet for this very Iceland trip. What followed was a wild escape to Canada, four months of forced separation and two trips to Central America, just so we could meet somewhere and be together. And now that the borders are open again, the stupid airplane is falling apart.

They have a replacement plane now. But it needs to be deiced. And just now it started snowing heavily, my boyfriend writes about an hour and a half later. He is going to miss his connecting flight to Germany. I am picking the golden piece of paper up and slam it into my trash bin. Shit!

But after a lot of back and forth discussions, he is—surprisingly and assuredly—on his way. At the last minute, the airline rerouted him through Munich on his way to Düsseldorf.

I had five minutes to run to the gate and get on the airplane, he texts.

Just when I am about to open a bottle of champagne for me and the golden wrapper in the bin, I receive an e-mail from the Airport of Düsseldorf: Nationwide strike. Most flights will be cancelled. Don’t come to the airport.

Whoa. Screw it! I am so coming to the airport! I am done with cancellations. Cursed trip to Iceland! I will pack my stuff and just go—dammit.

When I arrive in Düsseldorf, they indeed cancelled two thirds of the flights. But ours is still going. Champagne! Without golden wrappers but with the infinite joy of a successful reunion and finishing with an upcoming trip to Iceland.

“Holy shit, we are in Iceland!” I shout as I shake my boyfriend’s arm in disbelief while we are walking down the streets of Reykjavik. Incredible.

“Well, it took us only two years to get here. Almost a new slow-travel world record,” he says laughing. Now that we can finally laugh about it.

It is the end of March and thick, dirty piles of snow are lining up on the edges of the sidewalks. We stroll along beside colorful houses with metal facades, modern buildings with reflective glass walls, street art and rainbow-colored roads, little chapels and the gigantic Hallgrímskirkja church, which was designed after Iceland’s prevalent natural basalt columns. To me the church looks like someone has accidentally put the organ pipes on the outside of the building. But I love it!

The streets are dotted with little art galleries and small cafes. Most art places—no matter if they house photography, paintings, or sculptures—have at least one wooly sheep in their collection. Sheep, as well as Islandic horses, are a big deal on the island.

I am tempted to run head over heels into the stores to buy all kind of cute nonsense but then my eyes catch sight of the price tags. I almost drop my wallet into the harbor. Iceland is ex-pen-sive. Compared to Iceland, Switzerland looks like the junk-outlet of a local Bargain Box.

Reykjavik is a colorful city for young and creative folks, but it also has its melancholy side as well. There is the big harbor with its gray freighters bobbing up and down on the water in the icy wind. There are the run-down outskirts of the city and the rotten, cracked, wooden window frames in almost every building which makes me wonder why they don’t install anything better in such a permanently cold and wet country.

Walking in the gap between Europe and America

Not far from Reykjavik lies Iceland’s Golden Circle. No, it has nothing to do with the golden wrapper I tossed around so desperately the night before our flight. The Golden Circle is a beautiful roundtrip you can take by car or tour bus and includes some of Iceland’s most beautiful wonders of nature.

We gas up our tiny Toyota Agya which we rented at the airport—and which never let us down on the entire 1.900-mile-long Ring Road around Iceland (in March with mud and snow!)—and start off to a day trip around the magic circle. Normally you can make the entire loop in one day, like we do. But you can also take your time and extend your drive to two or more days and simply see even more sights.

Our first stop is Þingvellir National Park. The islandic Þ is pronounced like a tha. Islandic words seem to look like someone threw the alphabet into a smoothie maker and let it run for an hour. But the language is of Germanic roots and once you have figured out the pronunciation and managed not to faint because every word has 27 letters, it is not that hard to decipher. IF you are a native German speaker—haha.

Þingvellir National Park is a very special place, because it is the spot where the two tectonic plates of our home countries meet–the North American plate and the European plate. Exciting! The plates are drifting apart and you can actually walk up and down the gap that has expanded in the last 10,000 years and became 230 feet wider and 130 feet deeper. Great, our long-distance relationship will get even longer with time!

While driving further on the Golden Circle we are nearing the Geyser Geothermal Area. I am getting very antsy because I have a weakness for hot springs and geysers and I could watch them blubber and spray day and night. The area is home of the Strokkur Geyser which erupts every 5 to 15 minutes. When we arrive, I am amazed how close we can walk up to it.

We stare at the boiling soup in the unimpressive hole in the ground. Then the water surface first begins to show little turbulences. Small ripples and tiny bubbles. Suddenly the whole hole seems to burp out loud and the geyser shoots up, almost 100 feet high, white and majestic, into the slightly milky, slightly sunny sky. Of course, I am totally unprepared and can only capture some mist with my camera. At the second trial ten minutes later, my battery dies in the middle of the shooting. I glance at my boyfriend, guiltily: “I didn’t get it. Again. I don’t think we will be able to leave here anytime soon. I am so sorry.”

He smiles. “There are worse places from which you cannot leave.”

I love his humor. We are like twins in so many ways but in some moments—usually when one of us freaks or is in deep shit—the other one is the perfect counterpart and provides calmness, reason, and wit.

By the end of my never-ending photo session, we are soaked from all the geyser eruptions. And I could still stay and watch it for another day and night.

A golden waterfall and a crater with an ice lake

We are nearing the last two highlights on our trip on the Golden Circle: Gullfoss and Kerið Crater. Gullfoss, which translates into golden waterfalls, thunders wide and roaring in two cascades with a drop of over 100 feet into an extremely narrow gorge. I wonder, where is all the water going? It is probably that the canyon is very deep, which is just impossible to tell from where we are standing because white spray and masses of water are obscuring the view. Left and right along the falls lay thick patches of snow, resting calmly, a like the paws of a colossal, sleeping polar bear. Suddenly the sun peaks through the cloud cluster and a beautiful rainbow begins to develop over Gullfoss. We stare into the colorful, spitting, and blustering scenery in front of our eyes. Magnificent!

Last stop is Kerið Crater. The reddish volcano sand is wet from snow and rain, and we sink into the ground ankle-deep with every step we take. “I just hope I am not losing one of my shoes,” my boyfriend worries.

“I just hope we do not fall into the crater,” I reply.

But we make it. Shoes and all. The view from the rim is terrific and lets us observe the blue-green frozen lake at the bottom of the crater. And you can even climb all the way down! I secretly gather some volcanic rocks to add to my personal geological collection in my living room at home. It already contains shells, feathers and even a butterfly wing from various trips all over the world.

This was a fabulous kick-off for our Iceland-Finally-Trip. Next, we will hit the Ring Road which leads once around the whole island.

If you are curious about more tales from volcanoes, geysers, and wonders of nature you can go read my articles:

LSD for the Eyes: The Upper Geyser Basin of Yellowstone

From a River Hike to a Volcano Crater: 5 exciting Nature Experiences in Italy 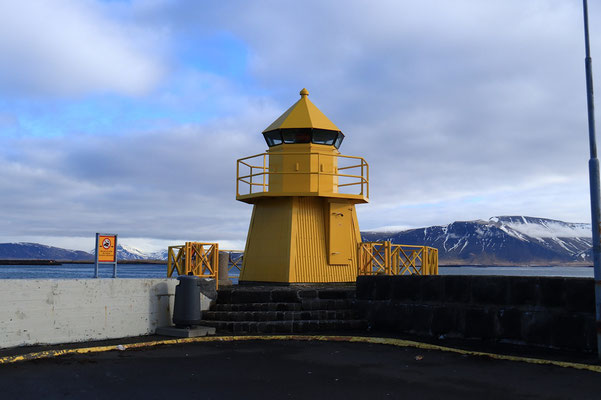 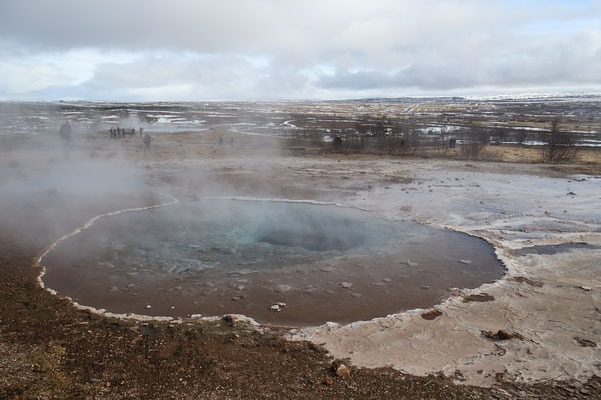 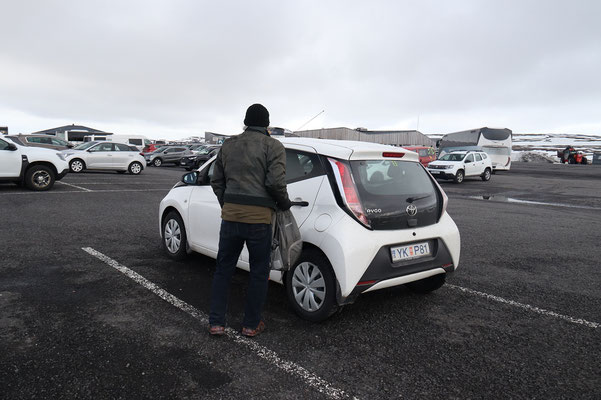 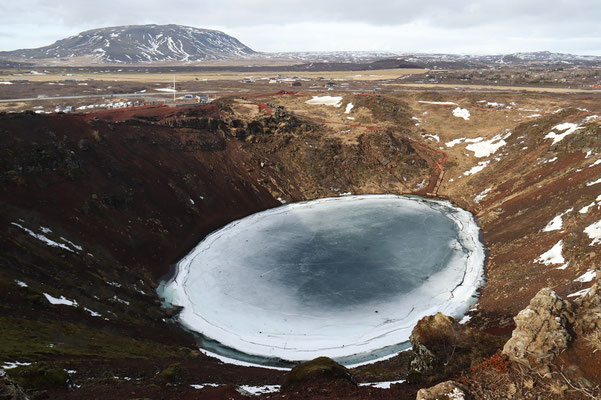