Feeling completely bananas after a 12-hour direct flight from Frankfurt, I land at the border control in San Jose, Costa Rica. Of course, there is a thunderstorm over the city during the approach, so the airline adds a no-extra-cost Freefall Tower ride including screaming passengers and profuse sweating.

I see my US-boyfriend who landed about 15 minutes after I did in Costa Rica. He is already beyond the border control and waiting for me, but first I must recite the address of my first accommodation for the border officials. Which right now, after my interesting landing experience, is about as easy as writing a doctoral thesis in quantum physics.

Then my passport is stamped for 16 days - which will be very important for my later onward journey to the USA - and I run like a cat to a can opener into the waiting arms of my boyfriend.

We will spend two whole weeks together in Costa Rica. Traveling on a road trip through the country in a rental car, hiking in the jungle, exploring volcanoes, and soaring on a zipline. From the Caribbean coast to the Pacific coast.

We spend the first few days not only in the limbo of the blue traffic haze of San José, but mostly in the remote Tortuguero National Park, which you can reach only after a one-hour boat ride. Where the monkeys roar at night, the toucans brighten the jungle foliage, and the lizards eat all your cake crumbles.

In the Blue Haze of San José

The trip to Costa Rica is not simply a vacation for me, but it is a necessary step get into the USA to be with my boyfriend. Stupid corona entry regulation for Europeans. Since March 2020, non-US citizens cannot have been in Europe during the previous 14 days, so Europeans must spend 14 full days in a third country before entering the United States. But since I did this through Aruba last year, I'm now a pro.

Shortly after we leave the airport, we are sitting in our rental car and fighting our way through the crazy traffic of San José. Why is the ventilation closed to the outside air? I wonder. I open it. A few seconds later, I'm almost overcome by the blue gases pouring out of the thundering buses and half-wrecked cars. With practically my last breath, I manage to close the ventilation.

The next day, when we explored San José on foot at 6 AM because I have jet lag and have been up since 3 AM, the big city with its 340,000 inhabitants has not exactly gained in charm. Homeless people lie on sidewalks with their heads covered by cardboard boxes, sounds from monstrous truck engines try to drown out every rocket launch in Cape Canaveral, and electrical cables hang so thick and innumerable on lampposts that a short-circuit would probably blow up the moon. However, I don't travel just to see beauty, but to see the world as it is. Something you cannot always see from the air-conditioned package bus. We roam the streets of the city center, find interesting street art, chat and laugh in a park, and at the end treat ourselves to a big smoothie.

But that is about all it takes to see San José.

So the next day, we jet off to the Caribbean coast of Costa Rica. Destination Tortuguero. Although jet off may not be quite right. There are no American Interstate Highways here. Most of the roads are intercity roads, where you are allowed to drive 25, 35 or a blazing 50 miles per hour. The speed limits are painted on the asphalt and sometimes they are so washed out that you don't always know what's going on. Most importantly, motorcycles have right of way. Always. No matter if they are left and right, loaded with bananas or palm trees, or have women in flip-flops sitting on the passenger seat with children under their arms.

As such, most of the main roads in the country are in very good shape. They are paved, although many have a few potholes in them. You do have to overcome the slight apprehension that comes with realizing there is no curb, and the rain gutters next to the road seem to drop 10 feet into nothingness, and there are no guard rails. At night without streetlights this is not especially amusing. Otherwise, driving a car in Costa Rica, like the rest of the country in general, is not very dangerous. Costa Rica is one of the most advanced countries in Central and South America and there is absolutely no reason, to feel insecure here. At least when you use common sense.

Around noon we arrive in La Pavona, where you can park your car in a large parking lot for $10 a night. Because no cars are allowed where we want to go. Or even possible. Boats only.

By Ferry Through the Jungle to Tortuguero

For an entire hour our motorboat rushes along the brownish water of the rivers from the rainforest to Tortuguero. The river, and a small airport, are the only links between the village of Tortuguero and the rest of Costa Rica.

While the locals stare at their cell phones on the journey, I watch the teeming mass of creepers, palm trees, lianas and moss-covered plants that cover the shore, disappearing into a huge and impenetrable jungle lining the river. This is my first time in the tropics. My boyfriend smiles and puts his arm around me. He has already been to jungle rivers in Peru and Ecuador, but he remembers well his very first wondrous impressions of the rainforest there.

As we dock, we stumble into a tiny, colorful village that basically only consists of one sidewalk. On the left you can see the river, on the right, between the houses, I glimpse the thundering Caribbean Sea. Tortuguero is situated on an extremely narrow piece of land. We are staying in a small wooden house abutting the national park and nestling amongst tall trees, huge flowers, and bushes.

All the plants here are monumental in size compared to those in Europe. It is extremely warm and humid, which apparently causes tiny ferns, such as those in the forests of Germany, mutate here into oversized plants, like a five-foot-high tree with a massive trunk.

A Canoe Trip to See Caimans and Monkeys at Dawn

The next morning, we go on a sunrise canoe tour into the rainforest together with our host. I am tired and excited, just like the weather. Because it is pouring rain, and the sun is shining at the same time.

Under a fantastic rainbow, we paddle off into the morning silence of the rainforest.

The boat glides noiselessly over the smooth surface of the water into the bustle of tropical plants. Our guide silently points to a brown, long-beaked bird. I wave my camera around as soundlessly and inconspicuously as possible. Then he tells us something about the breeding season, nature conservation and the waters. Shortly afterwards he looks up through his binoculars, “Toucans,” he says.

I'm freaking out! If I really wanted to see an animal, it would be a parrot or a toucan.

And there the toucans just sit. Three at a time. In a tree. More colorful than the rainbow. Very beautiful. Shortly afterwards, a flock of green parrots screech overhead. As if they find it almost offensive that I only photograph the toucans and not them as well.

As we turn and delve deeper and deeper into smaller and smaller channels on the three-hour journey, we begin to duck under palm trees and branches, while the noises become more and more intense. Hundreds of birds begin to sing, beep, croak, and hum. And I don't mean like the annoying Hu-huu-hu pigeons in a big city park.

Then suddenly our guide gets excited. Two eyes peer up at us from the water. A caiman. A submerged crocodile-like body just floating, waiting, watching. I'm blown away, but fortunately not eaten up. After observing several neon-green lizards, a group of caiman babies and a heron, our host finally discovers a horde of monkeys for us. They run amuck wildly in the branches above us, and when we stop to watch, they throw a thick coconut right next to our boat. If that is not a definite piss off! then nothing is.

Eerie "Wind" in the Jungle Night

In the following days we hike through the jungle of the Tortuguero National Park, where we run over hot sand into the roaring sea, which sprays us with a bathtub-warm spray, and eat lasagna with a palm heart as the sun sets slowly over the jungle. Although palm hearts may sound like nasty emergency surgery, they are very tasty.

One night, it rains heavily. Our wooden house, like most houses here, has no glass in the windows. Fly screens only. Because it's always warm in Costa Rica. The houses are built with long eaves, so the rain does not get in.

I lie awake next to my boyfriend, who even the cacophony of twelve rampaging elephants couldn't wake up, and I listen to the pounding rain pelting the roof in the dark. Its magical. Then the storm slowly subsides. I'm starting to drift off to sleep. Suddenly, the sound of thunderous gusts of wind seem to sweep around the house. It howls and roars. I look out. The plants in front of the window are not moving. Strange. Kind of scary. Ghosts? Omigosh.

The next day we have breakfast orange cake that we got from the local bakery. I am just carelessly dropping some crumbs on the table when our host knocks. He excitedly shows us monkeys in a tree right next to the hut. Then he explains that howler monkeys often come at night and make a real racket. I find out that the creepy wind last night was not really the wind or a ghost, but the mysterious, raucous roar of the monkeys. Wow.

When we go back inside, all my cake crumbs have suddenly disappeared!

We spy two tiny lizards fleeing from the crime scene and escaping through a gap in the wall.

“Well, at least we don't need to sweep that up,” explains my boyfriend pragmatically.

Tortuguero - what an utterly spooky and incredible tropical dream.

Find out more about the second part of our trip here: Ziplining, secret Waterfalls and the Gate Mafia - Road Trip Costa Rica II. 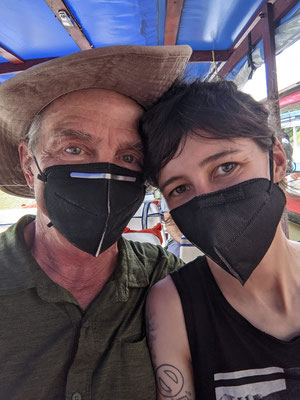 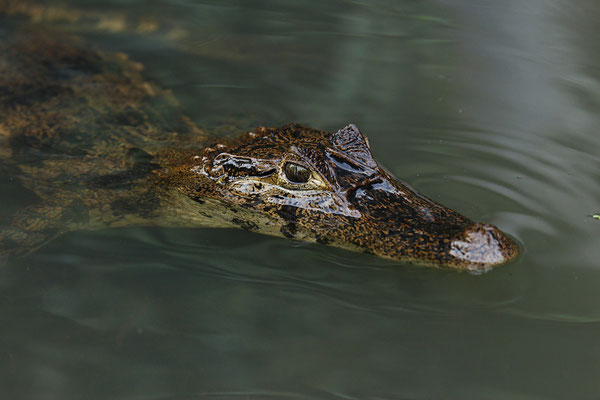 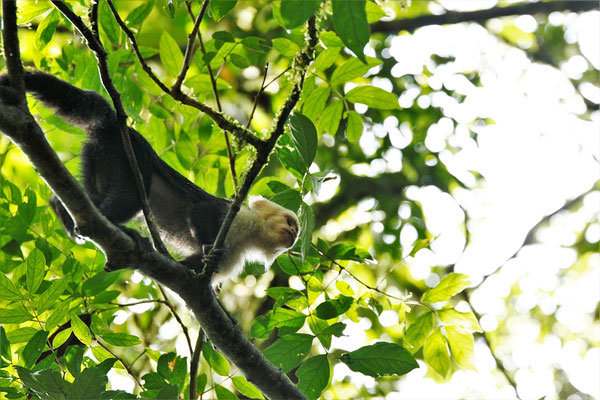 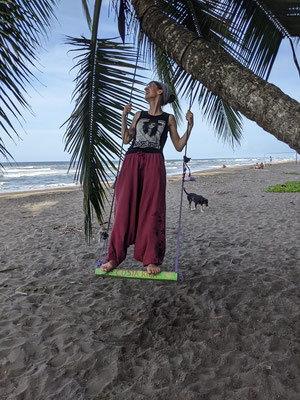